Oregon Bancorp, Inc., parent company of Willamette Valley Bank (ORBN), reported net income for the fourth quarter of 2016 of $954 thousand, which is up 92% from $498 thousand during the same quarter of the previous year. Earnings per share for the quarter were $0.88 and annual earnings per share reached $3.81. Full year net income results were a record for the company at $4.11 million. The company declared a cash dividend of $0.15 per share during the fourth quarter, bringing total 2016 dividends to $0.60 per share.

“Our robust financial performance this year is attributable to a slowly improving economy and continued execution of our strategic plan,” Neil D. Grossnicklaus, President and CEO, stated. “As the housing market recovers and broader economy slowly advances we have expanded into select markets to provide small business financing and residential home loans across the region.

“Our results have been driven primarily by commercial loan growth and continued strong fee income from mortgage banking operations. The Pacific Northwest has enjoyed solid economic growth and continues to attract in-migration from other parts of the country which is a trend that we expect to continue.” 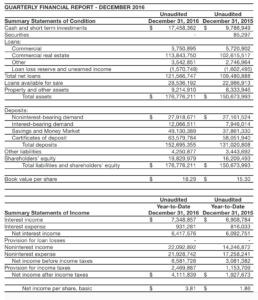